Not to be outdone by the other water-defying android device announced today, Fujitsu has taken the wraps off their very own splashproof offering. The 10.1in Honeycomb-toting tablet is powered by a 1GHz dual-core processor and also manages to squeeze in 16GB of storage, a microSD slot and a CMOS camera to boot.

We’re not sure just how waterproof the shiny slate is as of yet, but we’d be more than happy if it could survive the all-too-frequent coffee spill that has dragged many a gadget to its watery grave in the past.

The Arrows tab is due to be released in Japan next month, with no word on pricing or international release dates as of yet. Return ticket to Tokyo anyone?

Bowers and Wilkins brings Zeppelin Air app to the party 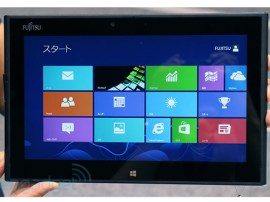 Ever wanted to go swimming with your tablet? Now you can make your dreams a reality with Fujitsu’s Arrows tablet