Announced last November and reviewed by us in February, Cowon’s touchscreen video-playing pal has finally deigned to make its way onto UK shelves.To make up for the delay, there’s been a little internal tinkering. The redundant DMB (Digital Multimedia Broadcasting) receiver, designed for Korean mobile TV, has been tweaked to become a fully functioning DAB radio with recording features.The D2 also stacks up favourably next to its new rival, the video-playing iPod Nano. Despite having an iPod Classic-sized 2.5in screen it measures roughly the same height as the Nano and only a touch longer – albeit with a hefty extra centimetre of thickness.Course, it’s also now got the 3.5in screen of the iPod Touch to contend with, but even that doesn’t have DAB, and D2 has one other trick up its sleeve – a mighty 74mw output. Not great for preserving your hearing into old age, but perfect for listening with big cans. Pass those Denon D5000s.Essentials Cowon iAudio D2 4GB Price: £170 On sale: Now Contact: Advanced MP3 Players Related stories: The iPod Touch is here – and it’s Wi-Fi Gadget of the Day – iriver Clix 2 8GB Gadget of the Day – Archos 405

Looks like Apple accidentally spoiled this one: the iPod line isn’t dead yet 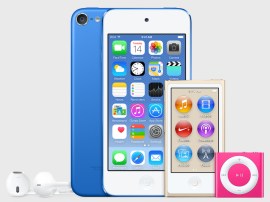 Apple iPad Mini – and five other gadgets that are better small

As Apple’s mighty iPad looks set to hit the shrink ray, we take a look at a few other pieces of tech that have improved after getting a nip and tuck

Looking for an outlet for your vast musical talent? Turn things up to 11 with Tascam’s little black box