While Robosapien may rule robotkind, in droid terms there can be only one: R2-D2. Luckily, Think Geek’s just got a batch of 15-inch high versions in, ready to bring a little Star Wars into the home.Like iDog, he lights up to indicate his mood but, without his camp companion to translate, his audible musings are but beeps to us. Thankfully little R2 is more than capable of understanding human commands; over 40 in all.Yank out his retractable arm and he can carry a drink or just tell him to patrol on his own and he’ll wheel himself around, beeping merrily and dodging and obstacles thanks to his built-in sensors.What could be better to mark the 30th anniversary of the original film? All we need now is a C3PO to find out what the devil he’s beeping on about.Essentials R2-D2 Interactive Astromech Droid Price: $130 + shipping On sale: Now Contact: Think Geek Related stories: Gadget of the Day – Spi-Dog and Venom Gadget of the Day – Akazawa PLEN Robot D’oh! It’s Homersapien

Use the two-by-fours, Luke 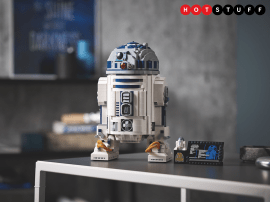