This time, rather than teaming up with existing designer buddies such as Neil Poulton or Philippe Starck (as it did to stunning effect with our Tech Accessory of the Year nominee, the Blade Runner), it’s cut a deal with luxury French brand Christofle.

A nightmare for photographers

The Sphère’s finish is the result of a manual plating process, and it’s polished by Christofle’s silversmiths, who more frequently buff up jewellery, cutlery and tableware in their Normandy headquarters. The sheen is as reflective as a mirror, which makes it a fine object of intrigue for any oligarch’s desk, but is likely to scuff unpleasantly if you take it lawn bowling.

As for specs, it’s based around a 1TB 2.5in hard disk drive (although it’s far from clear where they’ve managed to squeeze it into this fist-sized ball), has USB 3.0 connectivity which also provides power, and there’s a blue LED status light at its base (OK, so it’s not completely spherical).

It’s PC and Mac-compatible, and a suite of software provides backup, public/private areas and password protection.

The Sphère will be available in Spring. Pricing hasn’t been announced yet, but given how much Christofle’s spoons sell for, you’ll have to save up a bit.

64GB just not cutting it for you? Lacie has you more than covered 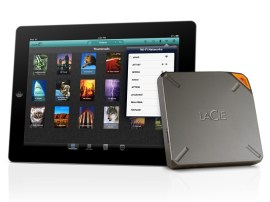 The LaCie Little Big Disk Quadra 1TB is a regular little tardis. It crams in two 2.5inch hard disks to give you a whopping one Terabyte of storage. Be