The LG Optimus G Pro, that we’ve already mentioned before, has been shown off in detail by LG at last. It will be the world’s first mobile to feature Snapdragon’s new quad-core 600 CPU running at 1.7Ghz.That means a VR panorama camera mode similar to Google’s Photo Sphere and both cameras running in tandem, if needs be.

Also onboard will be a large 5.5in screen pushing out 1080p resolution, a whopping 3140-mAh battery, 13MP snapper, and a microSDXC slot.

The new LG flagship will be released on Wednesday in Asia with a North American (and hopefully European) launch to follow in the coming months. Check back to our MWC 2013 coverage for our hands-on review.

Two LG-made Android smartphones square off as we ask: which is the better of the 5in flagships? 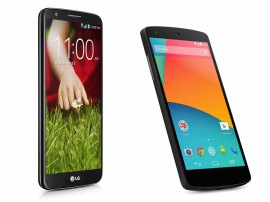 Have we wandered onto the Samsung stand? Is that a Galaxy Note 2? Nope. It’s LG’s flagship Optimus G Pro 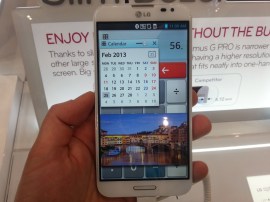 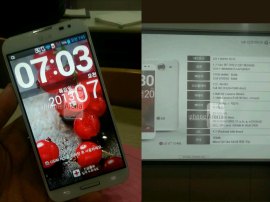