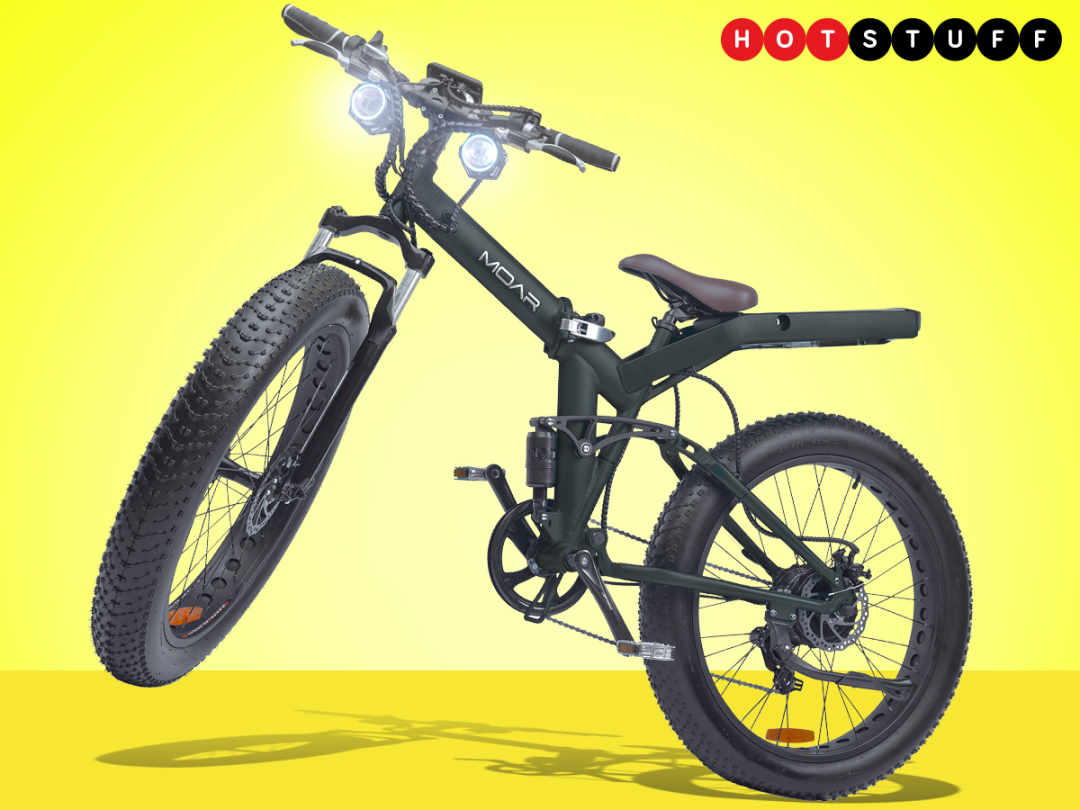 Finally! I can nail those speed bumps on the way to work.

Who needs kickers, right? Actually, hit anything at 28mph and you’ll probably get some knee-tingling airtime. And your gonads should survive the landing, too, thanks to the Moar’s full suspension setup – not something you’ll find on those fancy fixie bikes scooting around Shoreditch.

Oh, you didn’t think you’d be pedalling, did you? Sure, the chunky-wheeled Moar has a 9-speed Shimano chainset – but only old-school eco-warriers would be caught putting their vegan leather shoes to the metal.

Nowadays it’s all about batteries and boost – which is why you’ll find a 48V Samsung cell slotted into that bit at the back that looks like a mudguard. If you’re playing nicely, it’ll deliver a road-legal 20mph – or, if you’re off-road and push the right buttons, you’ll get a tasty 28mph from the mid-drive motor to catapult you towards the nearest tree.

I guess it’ll only be good for a few runs through the woods, then?

Yes – and then the ride home. While it looks like a properly mean machine, the Moar is as much a bike for the city as for the weekend trials – which is why it offers a maximum range of 85-miles (though you’ll have help out with some pedalling to reach that number). There’s a helpful LCD screen on the bars, too, so you’ll know just how long you’ve got until you need to start sweating.

What if I hit a really big hill?

That’ll probably affect the battery life – but at least the climb will be a cinch with the Moar’s pair of motors. A 750W mid-drive number drives the chain, delivering enough torque to pull a car – because why not – while a 500W rear-hub motor is perfect for those slippery slopes. It’s like having a pair of pals to give you a shove.

Is that why it has eyes?

Eyes? Zounds, man, those aren’t eyes! Those are 1000-Lumen projection beams that’ll light you all the way home. They’re powered by the main battery, just like the brake lights and indicators you’ll find at the back.

Prefer to take the train than risk the roads at night? The Moar bike folds up like a bulky Brompton for handy carrying or stowaway storage. That is, if you can get one: the Moar is up for funding on Indiegogo, with options starting at US$999.