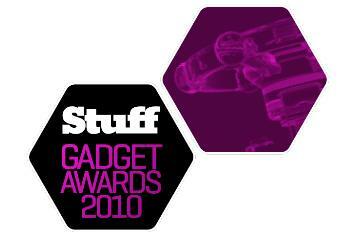 Last night, Stuff hosted the Stuff Gadget Awards 2010 in a spangly ceremony at the Science Museum. We laughed, we cried, we even gave out some awards.

This year there were 17 categories, with 3 of them voted by you lovely readers and the rest picked by Stuff’s expert panel.

Innovation of the year

As voted by Stuff readers, in association with Duracell

Microsoft’s console gets controller-free, motion-sensitive gaming. Smells like a revolution to us, and it obviously did to you too.

Portable entertainment gadget of the year

No other entertainment gadget manages to show off true convergence in such a covetable form. Spend your money on one of these and your pocket will be lighter, but in a good way.

TV of the year

We’re braced for the 3D content floodgates to open, but in the meantime we want options. This stunning set is ready for the future but makes the most of everything available today as well.

The world of first-person shooters has just as much competition as their online play modes, so this was always going to be a tough fight. The people have spoken, and you’ve voted this top of the pile.

Mobile app of the year

Getting fit is a tough business, so we like to use tech to ease the strain wherever possible. There are plenty of other fitness apps out there, but this is the most useful and costs nothing.

Eco gadget of the year

Until now, hybrid cars have only cool for what they represent, not how they look or drive. The CR-Z changes that with racy styling and a ‘naughty’ sports mode.

Web app of the year

It started with DVDs in the post, but now LoveFilm is embracing the future of digital media with super-convenient on-demand services to keep us entertained forever.

Computer of the year

If you want small size, you’ll normally have to give up big power. Not so with this miniature powerhouse that proves small can sometimes be mighty too.

Home entertainment gadget of the year

A great Blu-ray player is no longer just about being great at playing Blu-rays, it’s also about connectivity. The S570 plugs a whole world of online video into your TV and doesn’t cost the earth.

Tech accessory of the year

When we go on holiday it’s not our toothbrush we’re worried about forgetting anymore, it’s our files and media. This odd little box hooks your hard drive up to the ‘net so you can reclaim your digital possessions wherever you are.

Phone of the year

A massive catalogue of apps and a sparkling new hi-res display bring Apple’s new handset right to the front of the pack.

Proper sat-nav, on your phone, for free. Its sheer convenience and accessibility means that hardware makers are going to have to start thinking very creatively if they want to mount an effective counter-strike.

Camera of the year

Crams high-quality components into a stylish metal body and adds the flexibility of interchangeable lenses. We’re taking better photos than ever.

Time-killer gadget of the year

It’s a miniature quadricopter that you control with your iPhone and will even play augmented reality games. We’ve been killing time just waiting for this to be invented.

Thinner than your double-glazing and with the coolest remote control in the business, this telly is your front room’s unicorn.

This year’s biggest tech arrival has spawned a slew of imitators but manages to hold its ground with its slick interface and thriving App Store.

Readers’ gadget of the year

While it’s true that you can’t please everyone – certainly some will disagree with a few of our choices here – it’s nice that we can sometimes agree. You the readers have voted, and you’ve cast your ballots in the iPad’s box along with our own. You see – didn’t we tell you it was a game-changer?

For the full feature, check out the January 2010 issue of Stuff Magazine