If you weren’t already itching with excitement about Microsoft’s next console then this demo of its new Illumiroom technology will have you tingling. The Microsoft Research project – shown off in a video at the Samsung CES keynote – uses a Kinect and projector to extend your TV display onto the entire wall.

The Xbox 720 is already set to include Kinect 2.0 tech – and although the Illumiroom technology is a proof-of-concept at this stage, it could be the tech that gives Microsoft’s console the edge over the Sony PlayStation 4.

More details on the Illumiroom are set to be unveiled at the ACM SIGCHI human-computer interaction conference in Paris – between April 27th and May 2nd. Could Microsoft be laying the groundwork for an Xbox 720 that turns your living room into a holodeck? Only time will tell, but while you count down the days, check out this eye-popping video of the tech in action.

Soundflow docks use magnetic coupling to pump out smartphone tunes without cables, Wi-Fi or Bluetooth

CES 2018 preview: the tech we’re most excited to see

Fully Charged: Skype Translator preview begins, Devil May Cry coming to PS4 and Xbox One, and the VR fitness routine 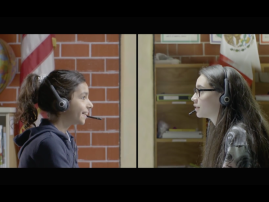