Look at that. It’s a lovely shade of red, isnt it? And look at all those buttons. We wonder what they do. What is this thing anyway?

It looks like some sort of camera, but it’s huge. Surely that thing at the back is some form of SSD? Where’s the screen for the apps?

At least it has a headphone port…

In a world where limelight-leeching drones clog our screens on reality TV, everybody is looking for their 15 minutes of fame – and it seems that goes for gadgets too.

Way back in 1984, long before Bond swapped his traditional Aston for a productplaced Beemer, JVC made its cinematic debut in a Hollywood blockbuster. The world’s first VHS camcorder, the JVC GR-C1 appeared on the shoulder of Marty McFly in the opening scenes of Back to the Future. Is there any better endorsement than that?

Owning a world first will sprinkle plenty of gadget kudos over any serious tech collector, so we wouldn’t blame you for wanting to snap one of these up for yourself. If you’re a filmmaker working on a project set in the ’80s (aren’t we all?) it’ll make an iconic prop, at the very least.

The GR-C1 used VHS-C tapes, cut-down versions of the Betamax killer that would fit inside an adaptor to be played back in your home VCR. In the movie, Doc Brown calls it a “portable TV studio” and as 1984 tech goes, he wasn’t far wrong. The GR-C1 had instant playback, white balance and exposure controls, plus a sensitivity switch for low-light.

If you do happen to grab one for yourself from eBay, beware – common sense dictates that the batteries in a camcorder this old won’t hold their charge too well, so take the opportunity to pick up some new ones if you plan on getting your GR-C1 up and filming – you should be able to pick some up from online retailers for under £20.

Rather surpisingly, 45-minute VHS-C tapes are also still around, as are the cassette adaptors, both available from Maplin. An additional unit was available for adding titles to your videos during shooting, although you may have to search longer and harder to find one.

This film was brought to you by…

Spielberg’s critter couldn’t resist the the Reece’s Pieces laid by Elliot. Who can blame him? He’s only human. Oh, hang on…

Over US$100 million is said to have been spent by the likes of BMW, Omega and Smirnoff on getting their gear into the hands of Brosnan’s Bond.

…or a two-hour long Audi advert, as some have called it. The German car company’s four-ring logo gets almost nine solid minutes of screen time.

Bill Murray’s bumbling Venkman crosses streams with Spengler, Stantz and Zeddemore to rid New York of demons – with a little bit of help from a giant man made of marshmallow

Often misinterpreted as a patriotic American anthem to wave your Stars And Stripes to, The Boss’s most famous fist-pumper is actually a protest against the Vietnam War.

Apple’s first foray into all-in-one home computing swept aside the traditional text-based front end, replacing it with icons, windows and a new input device: the mouse. 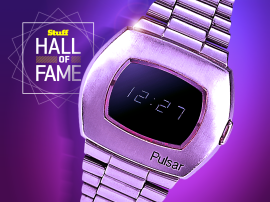 Remember when Apple wanted you to taste the rainbow? 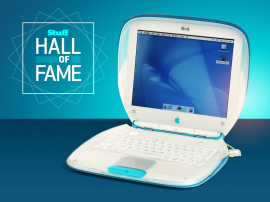 Long before the iPod, you could make your own tunes for on-the-go musical entertainment 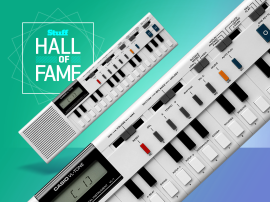