Plastic Logic has already lent its display wizardry to the flexible Papertab tablet and was kind enough to show us its wares in person last year, including a wearable wrist-mounted display and foldable tablet (shown below).

The resolution on offer is six times higher than existing signage while still providing clear from any angle (including in bright sunlight) and requires very little power to run.

At less than 3mm thick you can easily hang it anywhere and it could very well be the first step to truly portable foldable screens. Plastic Logic has already demonstrated video running on its displays, so we’re keeping our fingers crossed for a rollable 42in telly within our lifetime. We’ll settle for within twenty years, thank you very much.

Wacom teases its first mobile HD tablet – is this the end for the Galaxy Note?

Apple to release iPhone 5S and cheaper iPhone in August 2013

Why it’s time to get pumped about flexible screens

Gadgets can be stubbornly rigid, but the days of cracked screens and chunky cases will soon be over: welcome to the flexi-tech revolution 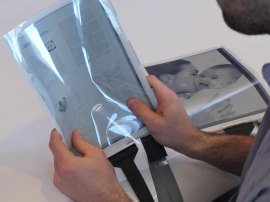