The best thing we’ve ever managed to build in Minecraft is a giant 2D cat with a bow tie and top hat. And, we must admit, we were rather proud of this accomplishment. That is until we came across the Westeroscraft project, whose dedicated crafters have painstakingly recreated an entire continent from the Game of Thrones universe. Click on the pics to enlarge them, and marvel away.

The recreation of King’s Landing alone features over 3,000 different buildings with, believe it or not, fully decorated interiors. The pictures are stunning and the Westeroscraft team has plans to turn the game into a gigantic open world RPG with quests and NPCs aplenty.

As for how long this all took? Our brains just hurt thinking about it, but the as-of-yet uncompleted world is already 35GB and growing.

Check out the full gallery here for even more amazing shots. Now if you’ll excuse us, we’ve got a giant cat to demolish out of sheer embarrassment. Forgive us, Mr Tibbles. 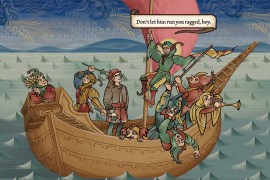