Playing Fruit Ninja with one finger and nudging Jenga-style blocks around with pinching motions with Leap Motion CEO Michael Buckwald has been one of the you’re-gonna-hate-us highlights of CES 2013 for Team Stuff so far.

Leap Motion has just sent out 12,000 developer units to some of the 42,000 devs who registered interest in the camera and sensor-laden USB device for Windows 8 and Mac. There’ll be a Leap Motion App Store when units start to ship early this year but it will be a completely open platform so apps using the tech can be sold by anyone making them.

Leap Motion’s CEO Michael Buckwald told Stuff that Intel’s gesture control tech, demoed this week, uses a sensor from Soft Kinetic and that the Leap controller is around one hundred times more accurate. The Leap can also track ten fingers in 3D space so Buckwald says the Leap could “definitely” handle picking up and moving objects in games like Portal which is exactly what Intel says its gesture recognition Ultrabooks will be able to do.

Buckwald reckons the Leap controller will be used just as much on smaller laptops, Windows 8 hybrids and tablets (with USB ports, for now) as at home using the likes of Asus All-in-Ones – excitingly Leap Motion announced that the device would be bundled with some Asus devices before CES.

And we can also look forward to a wireless Leap – as Leap Motion wanted to keep the controller lightning fast (a matter of milliseconds) it wasn’t possible to come out all guns blazing with a wireless device to start with but Buckwald thinks the tech will be there to make it possible “very soon”.

Leap Motion’s excited about more hardcore games tapping in to the technology this year too – there’s only so much Fruit Ninja you can play – and we can’t wait to start playing First Person Shooters where each hand controls a different gun, shooting in two directions. Buckwald also wants to see 3D RTS titles use Leap. Someone help the guy out and develop one would you?

Soundflow docks use magnetic coupling to pump out smartphone tunes without cables, Wi-Fi or Bluetooth

CES 2013 – the best health and fitness gadgets on show 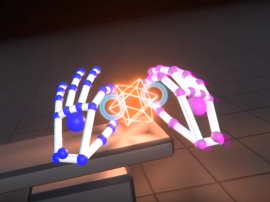 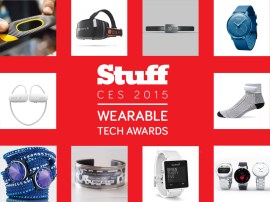