Windows 10 is coming soon, and it’s coming to a whole lot of gadgets: desktops, phones, tablets, Xbox One, and the HoloLens headset. But it’s also coming to a device that’s a whole lot larger than all of those: the Surface Hub.

The Surface Hub is built primarily for business use and designed for collaboration. It can support 100 simultaneous touch inputs (and three separate tablet pens), so a few people can all scribble and add notes at once, plus it has Kinect-style cameras and microphones for interactions and easy video chat.

And it’s gargantuan. The largest of the models comes in at a whopping 84in, and that’s for a crisp 4K display. If your conference room isn’t built to handle such a large screen, you might be better suited with the comparatively petite 55in version. Either way, it sounds like an impressively adaptable and intuitive device.

Naturally, that comes at a serious price. The Surface Hub will be available at £5,709 for the 55in model, and £16,269 for the 84in variety. Microsoft will begin taking orders from businesses on 1 July, but the units won’t actually ship out to consumers until September.

Windows 10 itself, of course, is coming out on 29 July for PC. But at least you can get a head start on mastering the new OS on smaller screens before the Surface Hub rolls into your enviable office this autumn.

The weekend’s top tech news bits, all in one spot 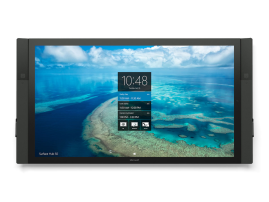 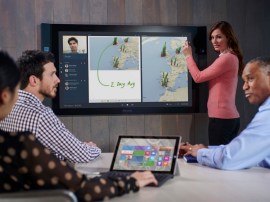 Giant tablet on steroids: Microsoft’s 84in Surface Hub has a 4K screen and Kinect cameras

Meet the ultimate collaboration tool that will completely destroy your wallet