Commuters! Forget puffing your way up a hill on one of those folding bicycles – the Moveo electric scooter is every bit as portable, and wafts you to your destination in style.

Developed by the Antro Group of Hungary, it took five years to build the folding, carbon fibre commuter-mobile. At 25kg (55lbs) it may not be light enough to throw it over your shoulder – but you can pull it along like a piece of luggage. After your initial train or car journey, the Moveo folds out into a funky-looking getaround capable of a city-friendly 28mph – with a range of 21.75 miles from fully charged to empty. Not enough to explore Europe, maybe – but that’s plenty of juice for getting you to and from work via a supermarket. Plus you never need pay for parking.

Throw in an hour long battery recharge time, a pedal charger and a seat to rest your weary legs and you can see why it’s commuter gold. Shame it will cost an estimated US$3100 to US$4600 – a hell of a lot more than the admittedly less well-equipped £250 Samsonite equivalent.

LG Optimus G Pro with 5.5in screen is now official

Minecraft gets a slice of Raspberry Pi

Out of the way, squirrels: I’ve got fat tyres and a folding frame 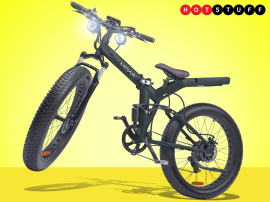 Do you ride about town without a helmet like a daredevil because of storage issues? A safety saviour cometh 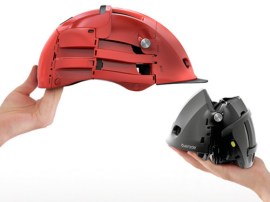