Sanyo has pulled the covers off a new range of Xacti camcorders today, all packing full HD functionality and wireless uploading using Eye-Fi.

Leading the bunch with a world’s smallest 1080i camcorder claim is the CS1. This skinny pocket camcorder promises 8 megapixel stills, 10x optical zoom and records in iMovie-ready format.

While the CS1 has the upright pocket camcorder look, the SH1 packs a more conventional design and a 30x advanced zoom to boot. There’s also a 35mm wide-angle lens and you can snap your stills at 10 megapixel resolution.

Also announced were the GH1, CG100 and CG20. The GH1 and CG100 offer the same 14MP stills and 12x double range zoom specs with different body designs, while the CG20 slots into the entry level category with 5x optical zoom and 10 megapixel stills.

All of the above feature 2.7-inch screens and mini HDMI outputs for watching your full HD footage on a screen that’ll do your masterpiece justice.

However, don’t think that’ll be the last we hear from Sanyo in the near future – a spokesman told us that Sanyo is prepping the world’s first waterproof HD camcorder for an announcement in the next 6-8 weeks.

That’s right, record four times HD resolution in your hand with the GY-HMQ10

In an effort to tick all the -est boxes, Sanyo has launched the Xacti VPC-CS1 – boasting that it’s the smallest, thinnest and lightest full HD camera 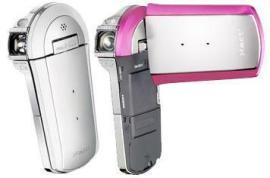 Sanyo’s Xactis once rode high in our camcorder Top 10, but have recently been squeezed into a no man’s land between dirt-cheap Flips and more advanced 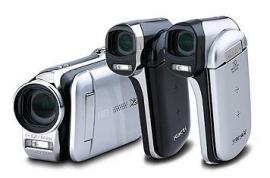