Songs on Apple Music can now be heard in Spatial Audio with support for Dolby Atmos at no extra cost.

It’s a hefty shot across the bows of streaming rivals like Spotify and Tidal, with the multidimensional audio upgrade in addition to a catalogue of 75 million songs in Lossless Audio available to Apple Music subscribers (£9.99 monthly).

Dolby Atmos tracks on Apple Music play by default in iOS 14.6 on all Apple AirPods and Beats headphones with an H1 or W1 chip, as well as the built-in speakers on the latest iPhones, iPads and Macs.

Apple says it’ll be adding new Dolby Atmos tracks as it goes and curating dedicated Dolby Atmos playlists to help discover new music in the format. Albums will also carry a badge to make them easier to identify.

However, there are price rises for Spotify Premium affecting families, couples and students, although the individual subscription rate looks set to remain at £9.99 a month.

So what is Spatial Audio and how can your ears get involved?

What is Spatial Audio?

Spatial Audio with support for Dolby Atmos creates immersive audio with multidimensional sound and clarity that comes from all around and from above the listener.

Songs in Spatial Audio come from some of the world’s biggest artists and music across all genres. Albums that are available in Spatial Audio will have a badge on the detail page to make them easily discernible.

Apple Music is also offering a set of editorially curated Spatial Audio playlists from rock to hip-hop to jazz, classical, Latin and pop, specially remixed or remastered for the format.

Still unsure? There’s an audio guide to Spatial Audio here including an introduction from Apple Music’s Zane Lowe, plus sample tracks from Marvin Gaye and The Weeknd.

How do I listen?

To listen to Spatial Audio and Dolby Atmos tracks go to settings in Music and under Audio there is the option to set Dolby Atmos to ‘Automatic’, ‘Always On’, or ‘Off.

Similarly, to start listening to Lossless Audio users should go to settings in Music, click on Audio Quality and from there you can toggle Lossless Audio on or off and select your preferred quality for ‘Mobile Data Streaming’, ‘Wi-Fi Streaming’ and ‘Downloads’.

Apple’s Lossless tier starts at CD quality 16 bit/44.1kHz and goes up to 24 bit/48kHz playable natively on Apple devices. Hi-Res Lossless at 24 bit/192kHz is also available as long as you opt in for the experience. Hi-Res Lossless also requires external equipment, such as a USB DAC.

Apple is also building Spatial Audio music-authoring tools directly into Logic Pro. Later this year, it will release an update to Logic Pro so anyone can create and mix songs in in the format. 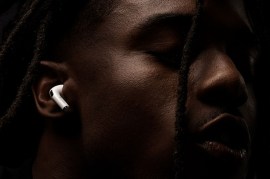